Festival dates: March 22 - 26, 2021
ON ZOOM
Final Showcase Concert will be available on youtube soon!
Pushing the boundaries of classical opera, Calgary's Michelle Minke has made a career out of inspired disruption.  Michelle's recent debut album, Expect the Unexpected, confidently merges genres and invites creative collaborations across the musical spectrum and brings Michelle's years of top training and international experience to new audiences. With her boundless vitality and powerful voice, Michelle performed throughout Europe and North America before returning to her home town of Calgary.  As founder and artistic director of Calgary's Cowtown Opera and the Cowtown Opera Summer Academy, Michelle's heartfelt excitement for contributing to the cultural identity of her city has earned her a place among arts champions.

An alumna of the inaugural Calgary Opera Emerging Artist Program, Michelle proudly performs with the company that enabled some of her first steps as a professional artist. Her many standout performances in Calgary include her role as Edith in “Pirates of Penzance” at Opera in the Village and most recently 2nd lady in the “Magic Flute” with Calgary Opera, and as the high-flying soprano ​on tightwire performing​ over the Calgary Stampede Grandstand Show​.
​Dedicated to Canadian contemporary composers, she performed in Calgary Opera’s world premiere, What Brought Us Here: A New Community Opera by Calgary composer Arthur Bachmann, and in Ukrainian-Canadian composer Anna Pidgorna’s one-act chamber opera On the Eve of Ivano Kupalo through NewWorks Calgary.
​ ​In addition to operatic performances, Michelle has a strong reputation for her oratorio and concert work​ including ; ​Brahms’ German Requiem, ​Bachianas Brasilieras, ​the Celtic Mass for the Sea by Canadian composer Scot​t McMillan, Beethovens 9th Symphony, and Mozarts and Verdis Requiems. ​Michelle has been featured at some of the world’s most esteemed festivals an​d concert halls such as​ the Mountainview International Festival of Song, the Charlottetown Music Festival, the New Brunswick International Music Festival, and Toronto’s International ​Bach Festival. Overseas, she has been acclaimed by international audiences at the Anghiari Festival in Tuscany Italy and at Spitalfields festival in London England as well as other concert performances in Poland, Lithuania, Sweden and France.

She is a Masters graduate in Vocal Pedagogy from​ the University of Toronto and the Opera School at the Royal Academy of Music in London, England as well as the Solti Te Kanawa Accademia in Italy, where she studied with operatic legend, Mirella Freni​.  Further training includes ​COSI, Banff Centre for the Arts,St. Andrews by The Sea, and received her first start in operatic training at​ Opera NUOVA in 2000.​
Michelle has been named as one of Calgary’s Top 40-Under-40 by Avenue Magazine, was a recipient of the Mayor's Enbridge Emerging Artist Award and was recently named one of Alberta's 25 Inspiring Artists by Alberta Foundation for the Arts for her commitment to the arts community of Calgary.
She currently is a voice teacher at Mount Royal University Conservator​y where she teaches advanced students who have gone on to place in the Metropolitan National Council Auditions, and have been accepted into prestigious schools such as Guild Hall, Julliard, Oberlin, New England Conservatory, Eastman, and all major Canadian Universities for both Bachelor and Masters pursuits.
​Upcoming performances include high profile private performances across Canada of "Carmen Remix", an operatic collaboration with Hip Hop Artist, James Noble and the release of an operatic children's album, "M.O.M- Minkee's Opera Music, the first Canadian operatic children's album to be released in over a decade. 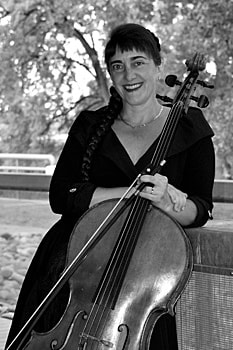 Calgary native Christine Bootland began her love affair of cello with her first teacher, Fay Johnson who instilled in her a love of all music. She later moved to John Kadz at Mount Royal College (now University) Academy of Music and completed a Bachelor of Music Performance degree at the University of British Columbia with Eric Wilson and participated in the Masters Program at the University of Toronto under the tutelage of Shauna Rolston. She has studied with renowned artists Aldo Parisot, Janos Starker, Zara Nelsova, and Lawrence Lesser at the Banff School of Fine Arts and has performed with well known classical musicians David Shifrin, Andrew Dawes, and Kai Gluesteen as well as back up for many rock and roll and country artists. A highlight of her career was touring Europe, Asia, Africa, and Australia as a member of the Armadillo String Quartet of Canada.
Christine has been an active performer in various chamber ensembles and orchestras across Canada and was first prize winner in the CIBC National Chamber Music Festival Competition with the JEB Quartet. She is currently an active extra performer with the Lethbridge and Red Deer Symphonies as well as the Symphony of the Kootenays and the Calgary Philharmonic Orchestra. Her passion is to share her love of music through performing and teaching and doing educational outreach performance programs within the community. Christine has adjudicated all over Alberta, B.C and Saskatchewan and her students have won numerous awards at all levels. Her philosophy is to help create future generations of music lovers of all styles whether they be professionals, amateurs, or concert goers. Each student is unique and her goal is to help them develop their own individuality and personality in their playing.
Christine has been on the faculty at Medicine Hat College Conservatory as cello instructor, ensemble coach, Academy Instructor and conductor and program coordinator for both the Community and Junior Orchestras since 2001 and the Bring Back the Music Program for public schools since 2013. In 2010, she was pleased to be invited to be a cello instructor at the University Of Lethbridge Conservatory Of Music and is currently an Academy Instructor of chamber music. 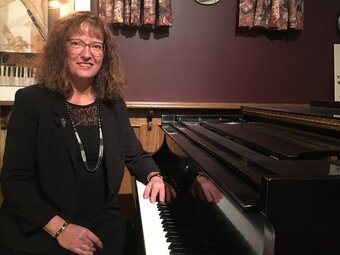 Linda Kundert holds a Master of Music in Piano Performance from the University of Calgary and a Bachelor of Music from the University of Southern California. She has an Associate Teacher’s Diploma from Mount Royal University and an ARCT Teacher’s Diploma from the Royal Conservatory of Music in Toronto (RCM). Her major teachers were: Willard Schultz, Charles Foreman, Priscilla King, Peter Turner, James Bonn, Adam Wibrowski, Donald Bell, Dr. Marienne Uszler and Dr. Jean Barr. Ms. Kundert is a successful independent studio teacher, RCM senior examiner, Frederick Harris editor & reviewer, festival adjudicator, collaborative artist, and she is a master class and workshop clinician. She is the Co-Founder, President & Artistic Director of Cassa Musical Arts, which celebrated its 25th Anniversary in 2018. Ms. Kundert was honoured with the Alberta Registered Music Teachers’ Association (ARMTA) Recognition Award in 2006, was Chair of the Canadian Federation of Music Teachers’ Association (CFMTA) “Peak Performance” Conference and Celebration held in Calgary in 2005, and in 2011 was presented with the CFMTA Hugheen Ferguson Distinguished Teacher Award. Ms. Kundert was also honoured with the City of Calgary 2015 Community Achievement in the Arts Award, and was awarded Teacher of Distinction by the RCM in 2016. She is currently a piano instructor at Mount Royal University and teaches from her home studio in Okotoks, in-person and online. Her students continue to receive many awards and scholarships in both performance and composition. Ms. Kundert loves to teach; she has nurtured many students of all ages and levels. With her guidance, more than 40 students have achieved their ARCT and Licentiate diplomas. For fun, she enjoys riding her horses, Leo and Caity, and she plays competitive softball.